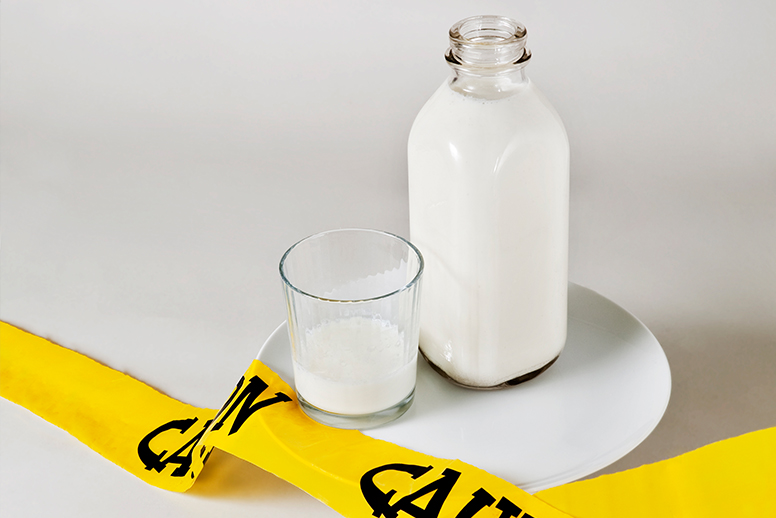 Sound familiar? You MAY be experiencing symptoms of lactose intolerance!

Lactose intolerance is a common digestive problem where the body is unable to digest lactose, a type of sugar primarily found in dairy products like milk, cheese etc.

Some may be able to drink a small glass of milk without triggering any of the above symptoms, while others can’t even tolerate milk with their tea or coffee!

Now, let’s get something straight, if you’re experiencing the above symptoms that does not necessarily mean your lactose intolerant. You MAY be experiencing affects from a long-term disorder ‘Irritable Bowel Syndrome’ (IBS). I would advise seeking a professional opinion before self diagnosing!

So, what causes lactose intolerance? Here’s a little bit of science for you…Keep up!

The body digests LACTOSE using a enzyme called LACTASE. This breaks down LACTOSE into two sugars called glucose and galactose which make it easier to be absorbed into the bloodstream.

So, people with lactose intolerance don’t produce enough LACTASE, making the LACTOSE stay put in the digestive system where it’s fermented by bacteria. This then leads to the production of various gases which cause the above symptoms!

Depending on the underlying reason why the body isn’t producing enough LACTASE, lactose intolerance may be temporary or permanent. However, most cases that develop in adults are INHERITED but do tend to be lifelong. Cases with young children are often caused by an infection in the digestive system and may only last for a few weeks.

Now, for those who THINK your lactose intolerant go and seek a professional opinion and get tested.

Those WHO HAVE BEEN DIAGNOSED with lactose intolerance I’m sure you know there are lactase substitutes which may be helpful. I’m not a fan of popping pills so I would advise seeking lactose-free foods & drinks instead!

So, foods & drinks that don’t usually contain lactose include the following:

Or even better, there are milks out there produced by cow’s (yeah cow’s) which contain additional lactase! This can mean you’re still getting the nutritional benefits of cow’s milk but less likely to experience the above symptoms…result!